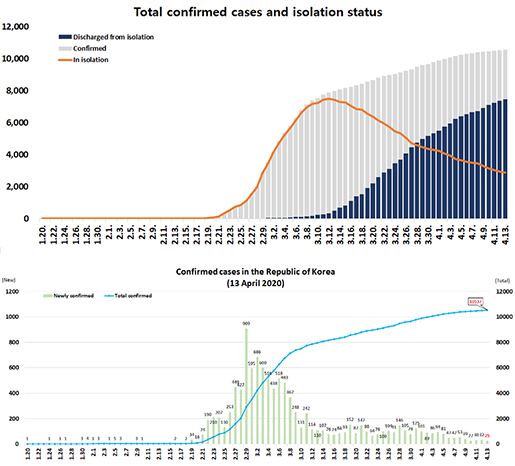 In early February, the thirty cases found were mainly in travelers to foreign countries including China. However, from mid-February on, the increase in number of cases was rapid. A patient with COVID-19 was identified from participants in a religious sect, and this was followed by the large number of confirmed cases found in participants of a Sunday service on the same day. The infection-related area was mostly confined to Daegu City and the near Province, Kyungpook.

Every member of the religious sect and all the close contactors were tested for SARS-CoV-2 infection and were guided to self-quarantine at home. Once the screening of the religious sect members was complete, the confirmed cases were greatly reduced, but the cases of travelers to Europe including Italy continued to increase.

Following the outbreak of MERS in 2015, GloPID-R member, the National Research Foundation (NRF) Korea furthered its efforts to develop research programs for preparing surveillance systems, diagnostic tools, therapeutics, and vaccines for emerging and re-emerging infectious diseases. Immediately after the report of the COVID-19 incidence in China, Korea Centers for Disease Control and Prevention (CDC) also utilized the established platform of diagnostic methods and many eligible companies were able to prepare the facilities to produce diagnostic kits for emergency use approval. It is thanks to the experience gained from the MERS outbreak that this appropriate and comprehensive preparedness was in place and ready to be deployed in the battle against COVID-19.